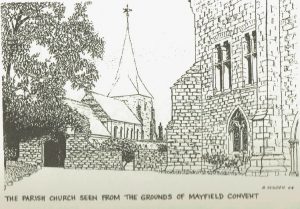 The first mention of Mayfield is as part of the Archbishop of Canterbury's estate that stretched from Lewes. Archbishop (later Saint) Dunstan established a wooden church and guesthouse here between 960 and 988 AD.

In 1200AD Mayfield Parish probably had only a few scattered settlers. “The whole weald was scarce anything else besides a desert and vast wilderness, not planted with towns nor peopled with men, but stuffed with herds of deer and droves of hogs only” wrote Camden in 1607.  Most activity took place in the autumn when drofmen drove large herds of pigs from the south to fatten up on the mast, acorns and beech mast. The drofmen had permission to build temporary shelters for their stay of a few months.

When Archbishop Boniface from Savoy developed the Parish in 1260 (with permission from the Pope to build a "manor" here), immigrants were attracted in by the offer of land and cheap rents. Plots of forest were cleared and subsistence farming began, initially on the better land in the valleys. The names of some of these areas give the clue: Wateryard, Bunewater and Loudwell.  West of Five Ashes (called Iardherst at the time) the name "reed" recurs (Spratsreed, Broadreed, Stilereed) which derives from the middle English word ridde meaning to grub up trees. These people, many of them serfs, had to provide wood products, hens and pigs for the Archbishop, and take them (firewood, roofing material, fencing, troughs) 15 tedious miles by ox cart down to Lewes, where at harvest time they had to reap their Lord's corn. Their only valuable product was the ploughshare which was made in the parish from locally-dug iron ore. The first "Palace" was built to allow the Archbishop of Canterbury to entertain his travelling household of up to 100 horsemen. The 400 acre deer park to the north of the Palace was constructed with ditch and bank and nine acres of fish pond were constructed.

Gradually after 1300, Mayfield village centre developed as the market stalls (there were 85 shop-places in the High Street) were transformed into houses, crammed in on the north side of the street with their barns and yards (forelands) on the south side. The Great Hall (now Mayfield School chapel), one of the finest medieval halls in England, was built by the great architect Michael of Canterbury, commissioned by Archbishop Winchelsey, probably around 1312 as a mark of his status which had been damaged by exile. Much of the 13th century church (except the tower) and most of the village was burned down in the great fire of 1389, so there are no domestic buildings of earlier provenance. Mayfield became a byword for poverty: in 1341 the inhabitants complained that they had been forced to sell their seedcorn to pay royal taxes. The richer agricultural land on the Bivelham estate to the east of the village was Crown land, and managed by John of Gaunt in the 14th century, before Henry IV gave it to the Pelham family as a reward for helping the usurper to the throne. The quality of most of the land here was so low that thousands of loads of marl were dug to spread minerals on the fields, which explains many of the huge pits to be seen throughout the parish.

The Jack Cade rebellion in 1450 had serious repercussions in Mayfield and it is possible that Cade himself came from the area. He was certainly arrested in Newick Lane. In 1452 men from Rotherfield, Mayfield and Burwash proclaimed that they would depose the king, kill all the Lords and Bishops and appoint 12 of their own number to rule the country. The rebellion ceased when some of the men were hanged at Lewes. It seems that Mayfield became less attractive to the Archbishops who visited less and less often.

Henry VII visited Mayfield in 1486, 1492 and 1494, probably accompanied by his great friend and Chancellor, archbishop Morton. These visits were probably connected with the development of the local iron industry and the new blast furnace process, introduced by Henry from France. This industry developed in Mayfield itself from 1567 and made the place a major centre for production of cast iron cannon for forty years.

In 1510 Henry VIII visited Mayfield in early August for at least two nights. In the second year of his reign, aged 19, he was accompanied on his Summer progress by his elderly Chancellor and archbishop, William Warham, being inducted no doubt into affairs of state. Having been married to Catherine of Aragon for just over a year, Henry doted on her, so she probably accompanied him.

Eventually, in 1545, the Mayfield estate was sold by Henry VIII to the Gresham family, one of the families to benefit most from the Reformation. They had a reputation for dealing in monastic lead. Queen Mary's accession led to persecution of protestants and there were burnings in Mayfield of four people, none of whom were residents. The site of this was where Mulberry now stands, in Station Road. The flames would have been visible for miles. There is no evidence that the village was a centre of radicalism; it was probably chosen because it was a secure and important place.

The asset-stripping Greshams cut down all the trees and introduced sheep. Demand for English wool was strong. In 1567 Sir Thomas Gresham moved from Antwerp and its arms market to escape the Spanish and then to Mayfield to escape the plague. Sir Thomas set up his Mayfield gunfoundry (the dams or pond bays for the water-powered bellows can still be seen up and downstream from the bridge at the lowest point of Little Trodgers Lane). Cast iron guns were produced mainly for export and for naval use and in 1592 Henry Neville, Gresham's heir, gained the national monopoly for making these. By 1610, gun production had ceased and by 1720 this and the many other furnaces and forges were quiet. In the Civil War, the whole area declared for Parliament and there was little local conflict, and the Baker family managed the gradual decline of the Old Palace, taking the roof off the Great Hall in the mid-18th century. 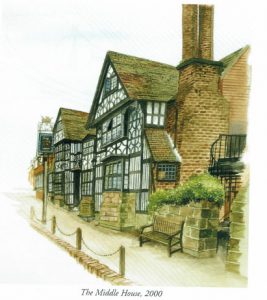 The Romantic movement at the start of the 19th century changed public perception of areas like the Weald: the area that had hitherto been seen as an agricultural desert, peopled by the poorest of the poor, gradually took on its modern aspect as some of the most beautiful countryside in the world. Widespread hop-farming took over. Victorian gentrification and the coming of the railways (emphasising proximity to London) revolutionised perceptions of the area. In 1863, the Palace ruins were restored and St Leonard's School established. Mayfield became a place where fantasies were constructed: in the 1930s Mary Poppins was written here.