It was ten minutes to eight on a normal Monday morning when an enormous explosion rocked the area and the Telephone Exchange was completely destroyed spreading over 200 yards of the surrounding area. It was later discovered that there had been a gas leak in the footpath running past and it had leaked into the exchange. The first caller to use their phone had caused a spark in the old switching gear that had ignited the gas.

Only shortly before a technician, Tony Burton, had parked his Cortina Mk 1 outside and picked up his Post Office van. He had entered the building to sign on but did not notice any gas smell. Minutes later his car was buried under the rubble! I believe people were concerned that he was still in it!

Amazingly no one was seriously hurt. Had it happened a few minutes later there would have been many children making their way past the site to school. All the windows in the St. Gabriel’s House dormitories of Mayfield St Leonard’s School on the opposite side of the road were blown in. The Headmistress, Sister Anne Murphy, praised her pupils as they exited the building calmly as though it was a fire drill. The girls in St Gabriel’s dormitories were just getting up. If the explosion been a few minutes later they would have been sitting down to breakfast and many would have been seriously hurt. There were just two 14 year old girls who suffered minor cuts. Around half of the classrooms were temporarily out of use.

Charlie Vockins, the officer in charge of the old Fire Station in Fletching Street was loading up his builder’s truck when the ground shook beneath his feet. He said “it was one hell of a explosion”, “I saw a mushroom of smoke and rubble go up into the sky”. He dropped everything and ran from Alexandra Road to the Fire Station to find that the blast had shattered the lock  and the large red doors were standing open waiting for him!

The entire fire crew, acting as one, reacted to the explosion and all turned up. They were among the first on the scene and radioed to a surprised Fire Brigade control in Lewes that they were going to investigate the explosion. It was the Mayfield fireman’s radio message after arriving on the scene that broke the news to the world. Mr Vockin’s said he had never seen anything like it in all his 23 years as a part-time fireman. “The Post Office response was marvelous, they had a telephone working in the village before 12 noon the same day linked into the Rotherfield exchange.”

The Memorial Hall Caretaker, Mrs Peggy Wicker, arrived for work that morning to find all the light fittings hanging from the ceiling but they worked. The hall was equipped with everything to use in an emergency so she set up a canteen service. She went to the local shop and bought tea, coffee, sugar, milk, soup and cheese and biscuits. It was a bitterly cold day and, assisted by Mrs Bubbles Smith and Mrs Jessie Richardson, a non-stop stream of hot drinks for the hard working engineers was provided from 9.20am until 4.30 pm when Post Office canteen ladies arrived.

The Parish Council Chairman, Mrs Kathleen Pither, recalled that when she heard the explosion she looked out of her window in Rotherfield Lane and saw a mushroom cloud hanging over Mayfield and immediately thought a plane had crashed. Mr Sydney Shaw, General Manager for Tunbridge Wells Telephone Area, called on her later that morning to arrange for his engineers to use the Memorial Hall, which was gladly agreed. The entire village reacted instantly to the telephone crisis and were amazed and delighted when the Post office managed to restore communications within a week.

A summary of the operations:
DAY 1 – 27 November 1978
7:50 Explosion completely destroys Telephone Exchange
11:50 Payphone in Memorial Hall connected to Rotherfield Exchange providing first link to the outside world
15:00 The first of three mobile telephone exchanges arrive
19:00 Leaflets to inform residents of the situation arrive in Tunbridge Wells to distribute next day
21:00 Emergency caravan equipped with payphones from Guildford delivered and connected to network

Directly following the eventful week the Post Office gave a party for the Villagers where the people were able to meet the staff who had worked on the emergency.

On 3rd February a party was given by the Village for about 290 GPO employees funded by the villagers holding a coffee morning and raffles. A public appeal was launched by the Parish Council to raise funds for the party and to purchase a silver cup. At the party Mrs Kathleen Pither handed the cup to Mr Sydney Shaw, General Manager of the Tunbridge Wells Telephone Area. The Mayfield Silver Band, whose bandroom was shattered by the explosion, provided music for the dancing and a very enjoyable evening was had by all.
(Further research is being made for information about this cup.)

I expect if this were to happen again, we might think with everyone having mobile phones it would not be such a calamity, but one should bear in mind that the mobile masts pass your phone signal back through the local exchange by cable! 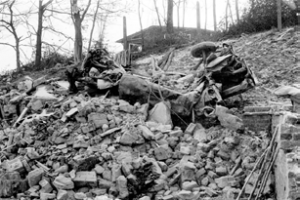 British Telecom has kindly agreed to allow guided tours of the telephone exchange on Tuesday, 27 November between 10.30- 12.30pm to commemorate the explosion. The tours will consist of 10 visitors at a time and are expected to last for around 15-20 minutes. To book a place on a tour please telephone Brian Pike on 873367 or email wbtpike@btinternet.com.
W. Brian Pike, long retired member of Tunbridge Wells
Telephone Area

This site uses Akismet to reduce spam. Learn how your comment data is processed.

You can find out more about which cookies we are using or switch them off in settings.

This website uses cookies so that we can provide you with the best user experience possible. Cookie information is stored in your browser and performs functions such as recognising you when you return to our website and helping our team to understand which sections of the website you find most interesting and useful.

Strictly Necessary Cookie should be enabled at all times so that we can save your preferences for cookie settings.

If you disable this cookie, we will not be able to save your preferences. This means that every time you visit this website you will need to enable or disable cookies again.